Police expect tens of thousands of people to descend on downtown Minneapolis October 10 for President Trump’s rally, and ticket holders for the Coltrane Plays the Blues and Ballads show that night are urged to plan ahead and consider alternative modes of transportation.

Starting at 5:30pm Thursday, October 10, Target will close the (will call) lobby and adjoining skyway. Guests will enter the Dakota directly from the Nicollet Mall entrance.

The rally is scheduled for 7pm at the Target Center, and doors will open at 4pm. In addition to attendees, police expect thousands of protesters to descend on the area. Parking is expected to be extremely difficult. Police urge anyone coming to the area to consider using light rail or bicycle if possible.

Beginning 8pm Wednesday, the following streets will be closed around Target Center:

Minneapolis managed parking ramp facilities will be open for parking until full, including the ABC Ramps. On-street parking will be restricted in some areas of downtown to facilitate traffic operations.

Metro Transit expects to have regular service with detours as needed due to street closures. Riders from affected routes who are subscribed to receive alerts will see them Wednesday morning. Riders are also encouraged to stay tuned to Metro Transit’s social media channels for real time updates.

Shared scooters will not be available in Minneapolis on Thursday. Nice Rice stations and dockless hubs will also be out of service in the area near Target Center. Normal operations will resume Friday. 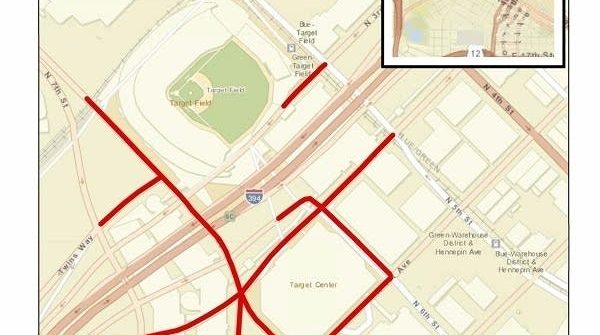