The Dakota has joined together with music presenters in our community and across the nation to protect the survival of independent music venues. We straddle the line between restaurants and music venues, and we consequently appreciate and are experiencing the challenges facing both. As difficult as it is for many restaurants to scale back to 50% capacity, it is nearly impossible for music venues to do this.

The precautions that music venues need to take not only include the safety needs of staff and patrons but also those of artists – both backstage and on stage. Music venues support and rely on a long list of performing artists, complicating the process of monitoring and ensuring health safety. Concerns ranging from shared equipment to backstage greenrooms (usually small) add more layers, and the complexities of presenting touring artists add to the challenges including travel, hotel accommodations, and ground transportation. The financial challenges – both for artists planning tours and venues presenting them – are daunting.

Musicians ranging from rising acts to superstars have banded together in a letter to Congress, stating that “the collapse of this crucial element in the music industry’s ecosystem would be devastating.” More than 1,100 of the nation’s most cherished musical artists have posted calls to action on their social media and issued a letter to Congress asking legislators to provide urgent financial support for independent venues and promoters in the U.S., which are in grave peril due to the pandemic.

From the Warming House to the Parkway, the Cedar Cultural Center, First Avenue, and many others, Minnesota has one of the richest independent live music venue scenes in the country. We have grown so accustomed to it that we tend to take this for granted. The harsh reality is that many of these treasured venues might not survive this period. And with them would go an invaluable resource for musicians and audiences.

Right now, a bill (the RESTART Act, S. 3814) is being considered by Congress that would provide a lifeline to the survival of live music – for artists, audiences, our local economies, and for the cultural richness it provides. Along with this, Congress is considering a continuation of the unemployment benefits that have been providing critical support for the people whose jobs have been upended by this pandemic.

The National Independent Venue Association (NIVA) has taken an active role in advocating for this. Fitting with the Twin Cities’ position as one of the country’s top places for live music venues, Minnesota has taken a national role through First Avenue’s CEO, Dayna Frank, who is also President of NIVA.

We are asking you to join this effort. Please visit SaveOurStages.com and learn more about what is being done. If you agree, please add your voices by letting your congressional representatives know how you feel.

Herb Alpert, one of America’s great musicians, producers, and benefactors (UCLA’s School of Music is named for him), was asked in a recent interview why music matters. His response was, “Are you kidding me? I think, actually, musicians are the second responders.”

We are precariously close to losing the venues that foster this resource.

Live music depends on its listeners and we thank you for being a part of our audiences and community. 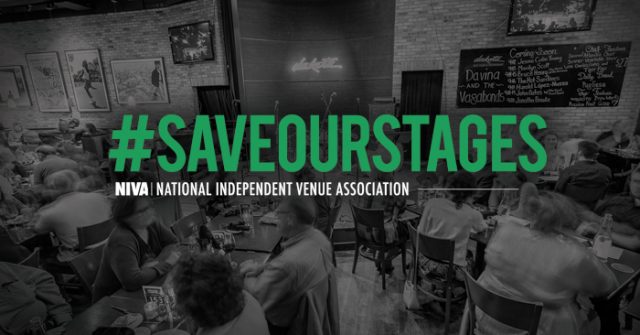